When we decided to do all the shoots over the summer, I was a bit worried they'd all look a bit, well summery (not so great for depicting November or March). Thank goodness for British Weather because it BUCKETED down for shoot number fourteen. 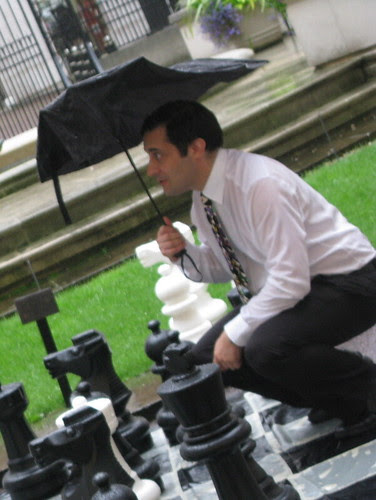 Our subjects here were a pair of chess geeks: Evan Harris and Sabrina Chevannes.In his 13 years as an MP, Evan gained a reputation for more than just party politics. A qualified medical doctor, he is well known for campaigning for civil liberties, human rights, evidence-based policy, secularism, parliamentary reform and, of course, libel reform, where he headed the parliamentary campaign. He also recently launched a science policy blog as part of the Guardian's new network of science blogs.
Sabrina's played chess for England, and recently helped launch Chess in Schools and Communities, a charity hoping to get a million children playing by 2015. Sabrina was also once on the Crystal Maze and her website has a photo of her standing over a chess set with boxing gloves (by this we mean Evan's great and all, but Sabrina is a bit cooler).
Other stars of the show: the AMAZING chess set, lent to us by the London Chess Centre, and our location, British Medical Association House. Behind-the-scenes, as well as usual Geek Calender team of art-director Louise, photographer Ben and videographer Greg, was chess expert Malcolm Pein.
After giving up on the idea that the rain might stop, we set up the game in the courtyard of the BMA. Here Evan and Sabrina shake hands before the start of the game. 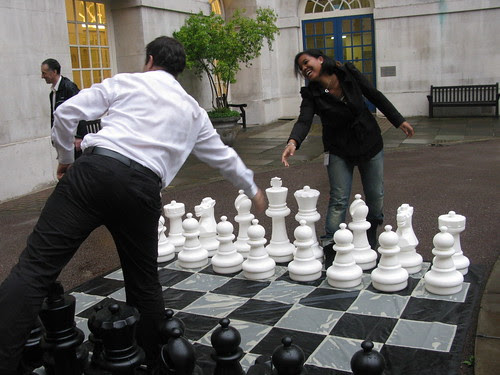 Chess was a very appropriate theme for Evan's shoot. Not only because he is a massive chess geek (seriously: that is possibly the geekiest thing on youtube), but because Chess is such a game of political tactics.
The whole shoot had rather a political flavour to it. Evan told us his "favourite geek" is fellow-calendar star Simon Singh, because of the way he helped get scientists active in political campaigning, as Evan put it, the way Simon "turned geeks on to libel reform". Evan also talked about the mechanisms and processes involved in the history of the libel reform movement; the ways in which science and fee speech groups connected, the way the moment in the political cycle was caught. 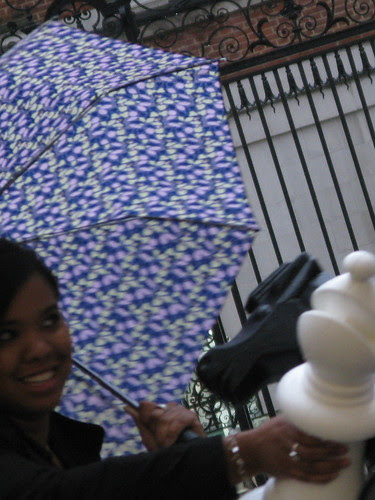 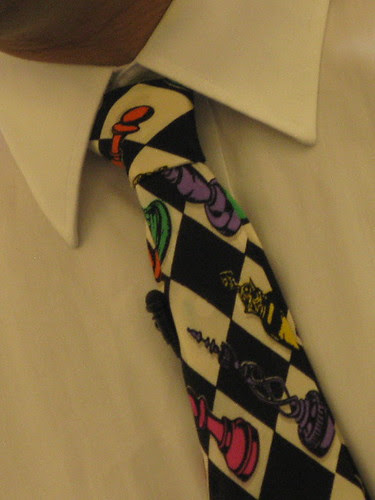 The other big theme of the shoot was fashion. Aside from everyone admiring Greg's trainers, we also had the umbrellas Louise speedily sourced from under her desk nearby (Evan's, sadly, was broken, it seemed to funnel water over him, so he was possibly even wetter that he'd have been without one... sorry Evan). There was also Evan's amazing chess tie, which he wore specially for the occasion. He admitted that had it since his was twelve, but has never had a girlfriend who would let him wear it in public.

I think Sabrina won the battle of geeky-chess clothing though: here she is using the chess board as a cloak (from the start of the shoot, before it got soaking wet). 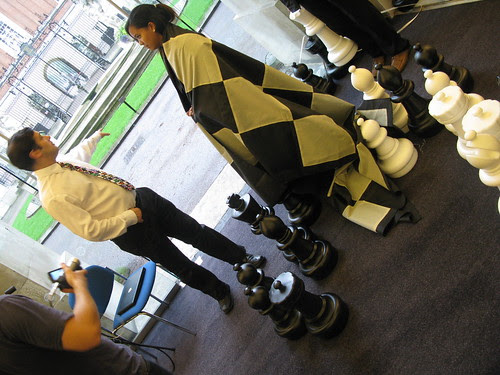 Sabrina won the chess game too by the way, hands down. As Malcolm said, Evan's a top player, it's just that Sabrina is better.


Thanks again to Evan, Sabrina and Malcolm, the Chess Shop and the British Medical Association.
Posted by Alice at 10:57