So far, all our calendar shots have been under lock and key. But we thought you might like a preview of some of them, so I took a sneaky screen grab earlier when I was having a look through the first set of images. These aren't the final choice of shots. They are low-res versions, they haven't been through post-production let alone design. But it's flavour of where we are going.

There is a lot of work to do before they become the calendar. We also still have more photoshoots not even represented here. Expect another three (at least...) blogposts about these soon (and checkout flickr for backstage pics of Shoot 12, Shoot 13 and Shoot 14).

Remember, we're only doing a limited print run and all orders made before 5pm British Summer Time, 15th of September 2010 will be put into our special prize draw.

Buy your calendar now.
Posted by Alice at 11:38 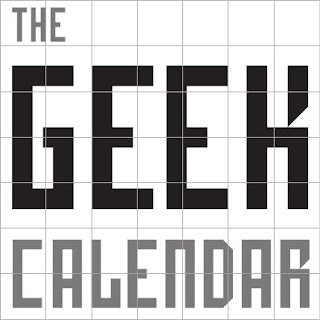 We're looking for some geek dates.

No, not dinner and a movie with a guy/ gal who has an impressive collection of 1987 synthesizers (though that might be cool too). We're looking for momentous dates in geek history to include in the calendar. A lot of calendars mark significant saints days, but the Libel Reform team pointed out Geek Calendar should be a bit different, with notes relating to science and technology instead. We agreed and decided we need about three "geeky dates" for each month. Our calendar's going to have two Decembers and two Janurarys, so we need double for those months.

This is what we have so far. What else should be there? Maybe we should replace some of the ones we have? Let us know what you think - here or on twitter.


January 4 Newton's birthday (1642, it depends on what calendar you use...)
January 26 first demonstration of television (1926)
... and if it was a date with a geek you were after, last week's Times Eureka magazine had a few tips. They suggested you take geeky-dates to the Science Museum, but note that trips to the Jenner statue in Kensington Gardens tend to be less successful. We're not sure how you can get the geek to go on a date with you in the first place though. This video might provide some hints:
Posted by geekcalendar at 16:25

One of the striking features of the recent boom in British nerd activity has been the inclusion of comedy. Clearly, many comedians have always been a bit geeky (and many geeks have always been funny), but it's noticeable that the two seem to be hanging out quite so much recently. Somewhere along the line science and technology got funny. Or at least it made some funny friends.

When it came to a geeky comic to include in our calender, there were a load to consider, from Josie "let me tell you about my A Level Maths" Long to Robin "Infinite Monkey Cage" Ince, but Chris Addison was personally recommended (hat tip Adam Rutherford), and he's even been in a sitcom set in a lab. Turns out, Chris's a ginormous space geek too.

Our shoot took place in the green room of the Wellcome Collection, the set-up being that Chris is hanging out backstage after a gig, sitting on the floor absorbed with a load of geeky toys.

Chris arrived at the shoot bearing an impressive quantity of space-toys (the biomedical-themed items come via team GeekCal's personal prop collection). He then pulled out the book he's currently reading: Michael Collins' Carrying the Fire. That's Michael Collins the astronaut, not the Irish revolutionary leader, in case you were wondering (the lesser known astronaut in Apollo 11).

As well as buckminsterfullerene and the problem of going off at tangents when you're trying to tell a story... not that team GeekCal suffer from this at all... um, were where we? Yes, we talked about the aviation museum at Duxford and the Apollo 10 module at London's Science Museum*.

We also talked about how amazing the film In the Shadow if Moon is and some of the other work by its film-maker. Also, Chris' recent brush with moon landing deniers (and why anyone would find it more entertaining to imagine a CIA plot than the fact that mankind has walked on the moon).

Chris said he'd done biology at GCSE, but didn't take science much further as a student. That didn't stop him maintaining an interest though, and he's often used science in his comedy.

He mentioned reading Richard Feynman's Six Easy Pieces. The book is based on a series of physics lectures, which famously a load of different people turned up to (not just physics students) because they were so easy to follow. Chris got two lectures in, was thinking "this is brilliant, I'm growing as a person", then turned a page... and felt like he'd missed something. We suspect a lot of people can identify with this (team GeekCal included). It's a brilliant book, but does take a swift tricky turn about a third of the way in. Requires a stiff cup of coffee after the first few lectures.

Not that Chris seemed to have much problem with physics, using his inflatable model of a spaceship to explain Newton laws of motion to our photographer.

We'll end with a shot that shows the excitement, wonder and glamour of space rather than the just something to play with, with Chris holding one of the rockets up next to the green room's lights. (we're also quite pleased with this similar snap of the spaceship standing by the green room mirror)

* Geek-tastic anecdote: Adam Rutherford was at the Science Museum recently, standing by the Apollo 10 module (admiring the scorch marks you can see up the side, no doubt) when he heard a voice that sounded familiar. He looked over and realised it was SCULLY OFF X-FILES (i.e. Gillian Anderson). It was several months ago, but he's still getting over the excitement.
Posted by geekcalendar at 13:58

The calendar should be available from October, with special pre-orders opening soon.

You can now sign up to our email list for alerts on when we go on sale.
Posted by Alice at 11:51