Shoot number thirteen, unlucky for some? Especially spooky as we were shooting by an old graveyard.

Pah! Superstition! Thirteen is lucky for us, because our geek number 13 was the most-awesome and amazing, Dr Petra Boynton. 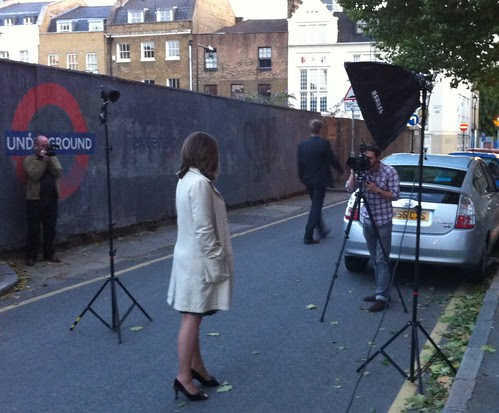 Petra, if you don't know her, is a psychologist. She lecturers at UCL, teaching doctors, nurses and other health professionals. Her research focuses on issues of sexual health, including the effects of pornography, women involved in street prostitution, policy and practice in sex education, evaluating advice giving in the media, sexual functioning, and modernising sexual health services. She is also an expert in research methodologies, a keen campaigner on evidence-based healthcare, and the UK’s first evidence-based Agony Aunt.

Recent posts on the 11 year olds on the pill stories or how to be an agony aunt (or uncle) should give you an idea of some of the work she is famous for. We can also recommended this video of Petra discussing science and sexuality in women's magazines, and her bit in the Guardian Science podcast recently, after her appearance with Guerrilla Science at the Secret Garden Party.

Our location (Petra's genius idea) was at the gates of the Cross Bones cemetery. Colourful, no? 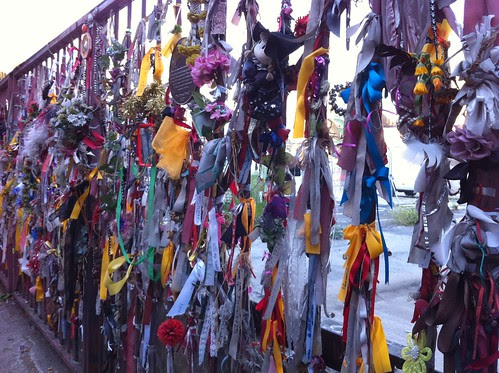 Cross Bones' exact age is unknown. There is a reference in 1598 to it as the "Single Woman's churchyard" (a euphemism for prostitutes). Excavations conducted in the 1990s as part of the Jubilee Line extension found an extremely crowded cemetery, with bodies piled on top of one another. It's likely that by the late 18th century, it seems to have become a more general paupers' cemetery and up to 15,000 people are believed to have been buried there.

This part of town lay outside the jurisdiction of the City of London, so Londoners would cross the river to enjoy its brothels, theatres and bear baiting (all illegal in the City itself). That's why the Globe Theatre is there. It's also why one of the roads by the Globe is called "Bear Gardens" (look closely, and you can spot the remains of the hook the bears were attached to).

There's very little of Cross Bones left, all there is to see really is the gate. This is a modern one, not part of any original structure. Indeed, it would be hard to tell there was anything special if there weren't so many ribbons, mirrors, toys, flowers and notes attached to them. Since 1998, on the 23rd of every month a vigil meets to mark "the outcast dead" and add these "trinkets" of remembrance (6:45pm if you want to join them). We saw a reference to someone who had died in 1752, and a note about a man who died in a workhouse at 87 (amazing that someone would have lived to that age in workhouse conditions, it makes you wonder about his story, no?).
The riverside bit of Southwark has all the glamour: Tate Modern, Christopher Wren's House (just tucked beside the Globe, built for a view of St Paul's) or the giant stained-glass window devoted to Shakespeare at the Cathedral. But here, just a few minutes further south, people of today have taken time to celebrate this lesser-known people of the area's past, and celebrate with colour too. 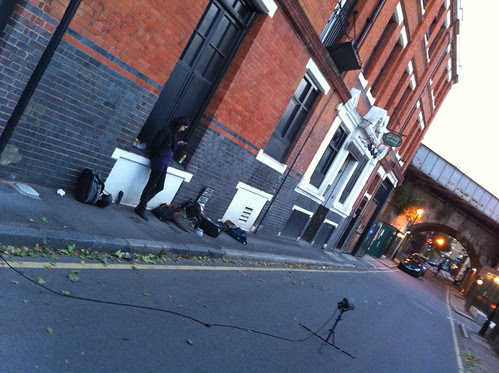 Although it was a lovely location it did make for a slightly complex shoot: this was the middle of a central London street after all. Even though it was quiet and traffic only flowed one-way, we had to keep shifting the lighting equipment at every cry of "car!". Still, as the light faded, our photographer managed to do pretty things with headlights in the background and the results were some very atmospheric pictures.

We worried that Petra's coat might look a bit like a labcoat. Not that we have anything against labcoats, but it would have been a bit odd in this context. However, if anything, it made her look a bit more like a police investigator. Petra and I were both reminded of Prime Suspect, but art-director Louise thought it was more like Dana Scully. Looking over the final photos, I think Louise is right (though Petra has better hair than Scully). 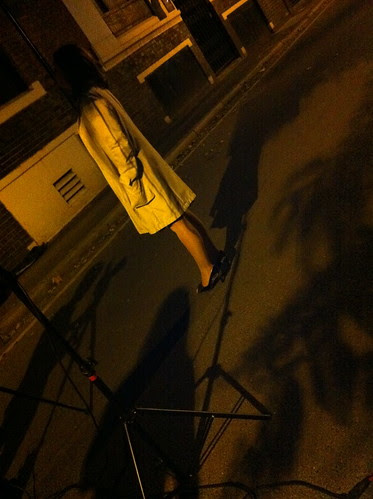 I'll leave you with a snap of the gate as it stood, still in the night, as we were leaving. An amazing bit of town: do drop by if you are in the area. 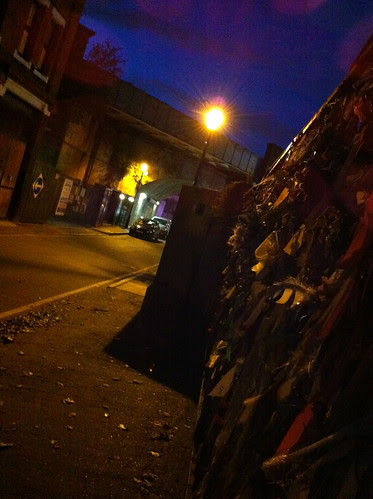 UPDATE: Petra's written a lovely account of her experience of the shoot over on her blog.
Posted by Alice at 09:27