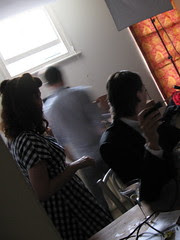 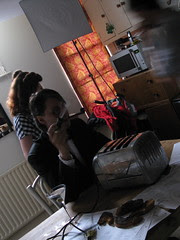 A domestic setting for our tenth shoot, at home with Prof Brian Cox, Gia Milinovich, baby George and their two cats.

We really liked the idea of having a geek couple for one of our shoots, and Brian and Gia seemed like the obvious first choice. Gia's been taking some time off work recently, but she is well known for media work on science and technology, and is a long-time blogger. She's also the reason Jonathan Ross is on twitter (but we'll forgive her). Brian Cox recently presented the acclaimed Wonders of the Solar System for the BBC, and is currently filming a follow-up series. He is also a working scientist; writes for the Sun; was scientific adviser on the movie Sunshine; and is becoming well known for his advocacy of science funding. Oh, and he used to be a rock star.

Inspiration for this shoot came from a great suggestion on twitter to show Brian struggling with the instruction manual to a microwave. We folded in the idea of a geek couple, added retro theme into this, and the idea evolved into a set complete with broken toaster, instruction manual and martini glasses, all shot in Brian and Gia's kitchen. The cats were quite taken with all our audio, photography, video and lighting equipment. 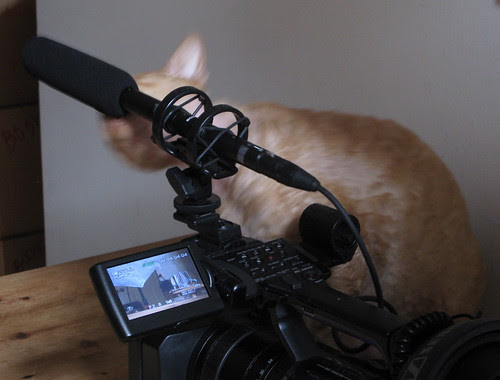 Once we could tear Barry away from the cats, we did a quick interview with Brian and Gia about what they felt geekiness means. To Brian, a geek is someone obsessed with how the universe works and the tools for understanding the universe, including cameras and buses. The reason he mentioned buses was that, as 6 year old, Brian was a bit of a bus-spotter. Well, "bit of" is probably an understatement: he would stare out of his front window for hours collecting the serial numbers of buses (not route numbers, not registration numbers: the serial numbers). He has since graduated to plane spotting, as you might guess from his twitter avatar.

Gia's felt her definition was a little less narrow: "it's just being obsessed with anything". Gia also had one of the best answers we've heard to the "who's your favourite geek" question: Ben Folds. She said she feel in love with his music but he also made feel ok about being a geek.
Here's another shot of one of their cats, this time exploring the props. We know what you internet people like. 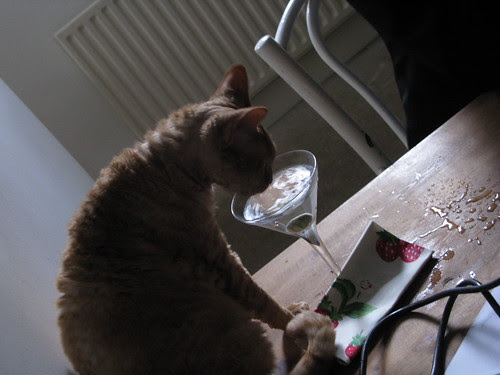 This was also the second shoot where everyone got very excited by the Guardian's microphone (again, joining us to record some interviews), and also yet another shoot to include a bit of a geek-out over cameras. Though Aleks and Greg's camera-off last week made an awesome image, Brian and Greg's discussion of charge, vibration and collection of dust in their cameras has to have been the geekiest. Even the cat talk turned into discussion of enzymes, as the man from the Guardian told us if you put a Siamese in the fridge, it goes black (NB: He hadn't actually tried this, and wouldn't suggest you do either. Please be nice to your cats).

We'll finish with a shot of one of Gia's shoes. She knew they wouldn't be in the calendar photos, but wanted the outfit to be complete anyway. A professional from head to toe, that Gia. 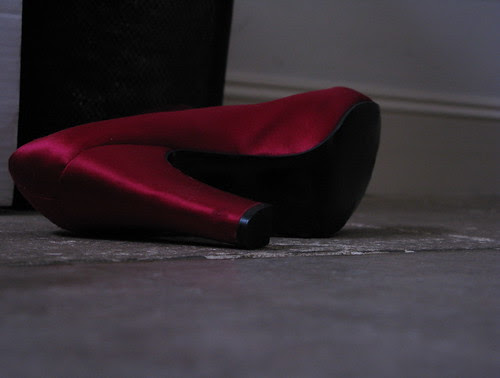