Dr Goldacre is a prolific guy: you've probably at least stumbled across his blog, tweets, seen him on telly, radio, in the Guardian, on stage or read his best-selling book. You can even buy the tshirt (or underpants*).

The dude gets about, and he isn't afraid to bring his opinions with him. Even the calmest of press officers spill their coffee at the merest rumour he's on site. Quacks, spin-doctors, PRs hide. The most hardened of journalists shudder at the very mention of his name.

So, our 6th subject: The angry young man of UK science? In person, not in the slightest. Ben was cheery and relaxed, humble even. He was also incredibly patient about our various silly requests. 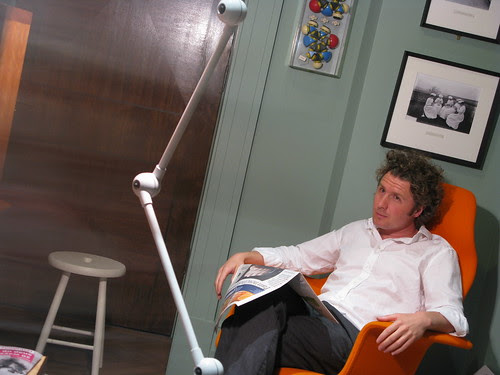 We got him to sit on a set of different chairs (including a very tiny stool, which must have been a tad uncomfortable) and lay about on the windowsill, draped in about fifteen different broadsheet newspapers whilst reading a life and style freesheet.

Our location was the Club Room at Wellcome Collection, and we played around with "framing" him through some of their bookshelves for a while (framing, as in media-framing geddit?). 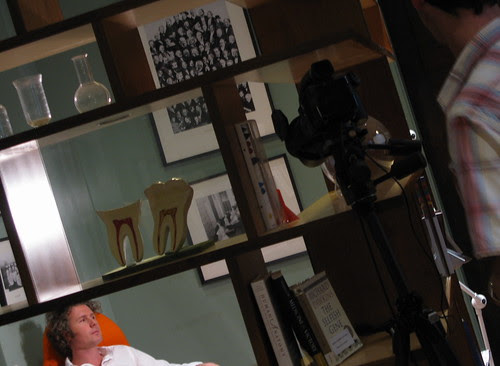 He chatted about the web, scientists and the media, and his new (awesome) idea for linking the first two of these. He also said he wanted to eat the brains of one blogger. That was a bit scary. We suspect he was joking though, and meant it as complement (e.g. see this lovely piece about science bloggers by Ben, from 2008). 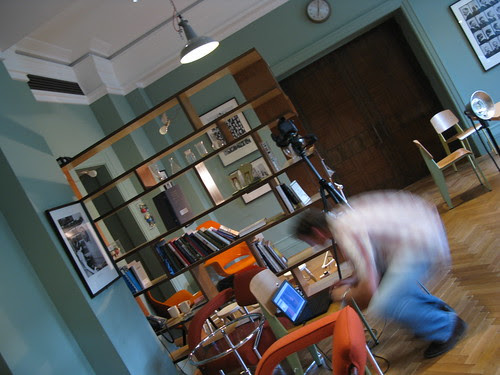 Then he toddled off and we packed up, with a great set of images for the calendar on file. All in all, a very pleasant shoot. Plus he was wearing shiny shoes. Yes, that is a tweet-pic of a load of mainstream media (dead tree versions) lying at the feet of Ben Goldacre. SYMBOLIC.

* When I am not messing around doing silly things like Geek Calendar, I am a (semi) serious academic and recently wrote the entry on popular science for the SAGE Encyclopedia for Science and Technology Communication. I take immense professional pride in the fact I sneaked a mention of these underpants into my piece (the book's out next term, we'll see if it made the final edit).
Posted by Alice at 12:15