From Greeks to Geeks

This post was originally written for and published on the Wellcome Library blog. Thanks to Ross MacFarlane for letting us re-post it on our blog, and for coming up with the genius title.

A 16th century woodcut from Wellcome Images has been used as the inspiration for a 2011 calendar page. The page from the Geek Calendar features mathematicians Alex Bellos and Matt Parker in a 21st century interpretation of an image from German writer Gregor Reisch's Margarita Philosophica. 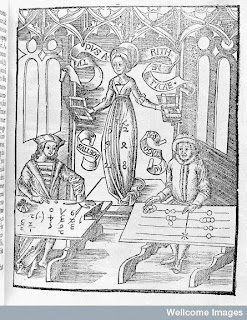 The Margarita Philosophica is a beautifully illustrated encyclopedia of knowledge created by Carthusian humanist Reisch (1467-1525). First published in 1503, it was used as a university textbook throughout the early sixteenth century. It contains twelve illustrated books on subjects including grammar, arithmetic, music, geometry, physics and physiology.

The image that inspired Geek Calendar’s mathematical photo shoot shows Arithmetica supervising a counting contest between the Christian philosopher Boethius, and Pythagoras, the Greek mathematician whose name will be forever associated with triangles. Boethius is using Hindu-Arabic numbers to calculate; Pythagoras a counting board. The image represents new versus old: Boethius is sometimes credited with introducing Hindu-Arabic numbers into Christian Europe. 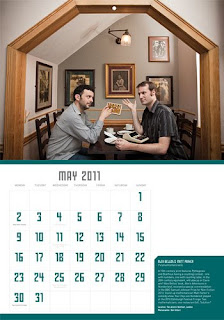 For May 2011, the Geek Calendar’s mathematicians are calculating a restaurant bill tip, one using a 1970s Casio calculator, the other using a modern abacus. Argument ensues between the two hot-headed counters, unlike the much more dignified Boethius and Pythagoras.

The Margarita contains many more fascinating illustrations, including some famous depictions of the human body. The Wellcome Library holds a number of editions of the work, the illustration shown above being taken from an edition published in 1535.
Posted by lulucrumble at 13:45