We thought we'd let our geek subject tell you about the second shoot, so what follows is a guest post from Lewis Dartnell (photos by me, though not many as it was too dark inside the Planetarium!) 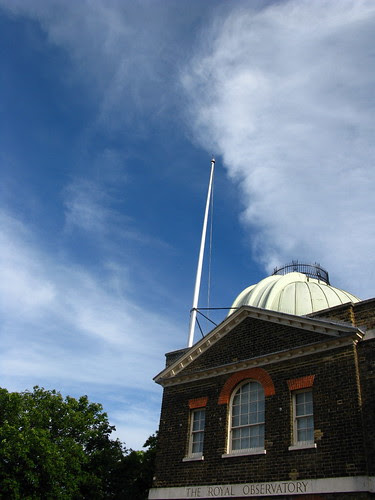 The plan for this Geek Calendar shoot was to go for an other-worldly feel. My research is in astrobiology and the search for life beyond Earth. I was scheduled to give a big public event at the Royal Observatory in the evening of Thursday 17th June, using the awesome wrap-around graphics capabilities of the vast planetarium dome to explain exactly where we're most likely to discover alien life, and I thought this might also make the ideal setting for some photos.

The Greenwich planetarium is as close to the 'natural habitat' of a research astrobiologist as you're ever likely to be able to reach in an afternoon, and it holds a particularly fond place in my heart. The extraterrestrial landscapes projected onto the cavernous dome also provide a far more exciting backdrop than the clinical blankness of the benches and shelves of the microbiology labs I work in at UCL.

So on the sunny Thursday afternoon, I met Ben the photographer, Barry the documentary film maker, and Louise the fearsome photoshoot director in the backstreet between the Wellcome Collection and UCL, and we bundled ourselves into a black cab with a heap of kit piled in around our feet. Barry had callously declared he wanted to sit as far away from me as possible (he later tried to claim it had something or other to do with the focal length of the camera lens… What'evs) so we sat diagonally opposite each other. Barry wired me for sound, balanced the video camera on his knees, and Louise lead the interview as we bounced through the jostling streets of central London towards Greenwich.

Being interviewed and filmed inside a cramped black cab driving to my next event was quite a surreal experience, but I'll be honest about secretly enjoying the thrill of feeling like a politician. In fact, with me never quite knowing if Barry had paused the recording for the time being or not whilst we nattered openly about science communication and communicators, I did feel acutely aware of the embarrassing potential for a Gordon Brown-esque radio mic incident.

The photo shoot itself was an enormous amount of fun. Ben needed a little while to set-up all his lighting, digital camera, monitor and other snazzy-looking items of kit so Barry, Louise and I slinked off to one corner of the dome (?) to muck about with some more informal photos. iPhones were commandeered to act as impromptu lighting and we got some great shots involving cuddly alien toys and Mars bars. 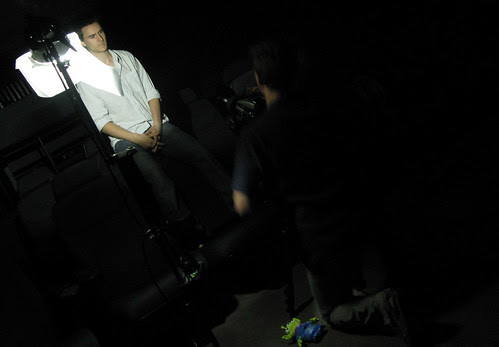 The main photo shoot was set-up so that the planetarium dome loomed behind me, offering a gorgeous backdrop of the projected images of martian landscapes or interstellar gas clouds. The angles, though, dictated that I needed to perch my ass right on top of the back-support of a reclining cinema chair, and I spent a leg-tensing half-hour trying not to wobble too much during the long-exposures needed for the dark conditions, or topple over backwards completely and re-break my arm. For the later shots Ben tried carefully tossing the Toy Story cuddly alien in to the frame, using the flash to catch it floating at head height beside me. Louise performed the vital role of toy retriever, huddling out of shot behind my chair. At the time, though, she did look uncannily like a Wimbledon ball girl crouching at the net, with me the Umpire peering down across the court.

We had quite a tight time constraint to get the photo shoot over and done with as the planetarium operator, Liv, needed to test-run the full show before the audience started pouring in. Liv hadn't finished coding the graphics and animation sequences for the show until 1 am that morning so I am deeply indebted to her for her dedication. I was pretty nervous before the show started (even more so than the Geek Calendar interview and shoot!) as there'd be no time for any rehearsal, and I just had to launch into a 45 minute ad lib over the hard-coded graphics sequence. All went well though, and there was a great response from the audience.

And where in the night sky will we first find signs of alien life? Ah, well you should have come to the planetarium show!
Posted by Alice at 10:48